MINOT, N.D. – Senator John Hoeven today marked the signing of the Chief’s report for comprehensive flood protection in the Souris River Valley by U.S. Army Corps of Engineers (USACE) Chief Lt. Gen. Todd Semonite. Hoeven hosted Semonite in Minot for the signing ceremony and to review the region’s project. This comes as a result of the senator’s efforts to finalize the report, necessary to allow the project to receive federal authorization and funding for phase 4.

“Finalizing the Chief’s report is a vital step in getting congressional authorization and funding for the project and bringing together the first four phases, and we appreciate Lt. Gen. Semonite for working with us on this priority,” Hoeven said. “At the same time, we need to keep looking forward, because this project is ultimately about protecting the Souris River Valley region from the threat of flooding. That’s why we are bringing together many different agencies, so we can identify funding opportunities and start developing a plan to secure those funds down the road for phases five through eight.”

Finalizing the Chief’s Report for Phase 4

Hoeven serves as a member of the Energy and Water Development Appropriations Committee, where he secured a total of $1.3 million for the Minot region’s feasibility study. Following this, Hoeven had been pressing Lt. Gen. Semonite, including leading a delegation letter to him in February, to sign the Chief’s report to approve the study, a necessary step in securing congressional authorization, which is required for federal funding. The Corps’ study has identified the fourth phase Maple Diversion as the preferred part of the project to receive federal support, and the Corps would fund 65 percent of its construction.

Preparing for Phases 5 through 8

In addition to the USACE, the agencies represented at today’s event include:

Hoeven serves as chairman of the Agriculture Appropriations Committee, as well as a member of the committees overseeing funding for DOT, HUD and FEMA. Through these roles, he will work to ensure the Minot region can access support under the federal programs identified in today’s meeting when constructing the upcoming phases, which include: 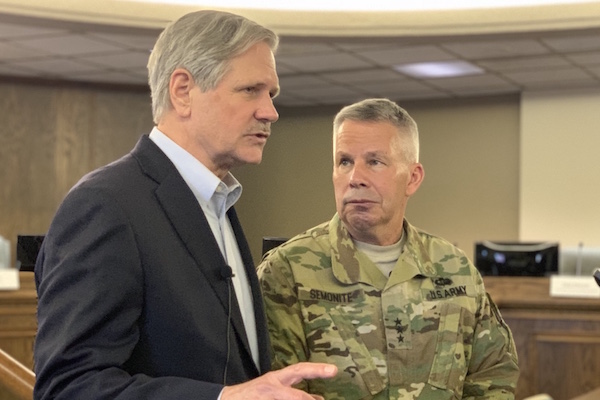